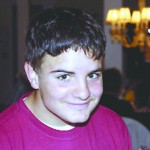 It began as any other day. I awoke to a shrill alarm and reluctantly ended up in a classroom doing my very best to keep focus. However, this day was not any other day. While I was sitting in class, my brother was talking to the police and regaining his bearings after a possible life threatening accident.

The police report detailed two teenage drivers. One was driving straight, the other crossing traffic, resulting in a T-bone accident. My brother was hit. The other boy was texting. The impact was on the rear left door. It was completely smashed in, inoperable. The doctors explained later that he was very lucky to walk away with a minor concussion and whiplash. Had the car hit further forward, if my brother had slammed on his brakes when he saw the car approaching, he could have sustained serious injuries.

I couldn’t wait until he arrived home, I was anxious to talk to him about what had happened. The description was average of any crash victim, he sounded shaken. I was surprised by one aspect of his detail. He kept repeating how thankful he was that he was wearing his seatbelt and how he knew to think quickly and not slam on his brakes. Instead of reacting as a typical teen driver would, he accelerated to bring himself and his passengers away from the oncoming car.
What if he hadn’t learned? What if he would have frozen in the moment as so many of the peers his age? What if he hadn’t been paying attention like the guy that hit him. I could have lost my brother. I had reached a turning point and I was now excited to learn what he had learned. I knew that driver’s education had the potential to save my life and give me the same things people discover after years of driving experiences.

Thousands of teenage drivers are killed and just as many are the cause of accidents that kill others. Teenagers have a nasty habit of thinking that nothing bad can happen to us. I was included until I saw it happen to my brother. Driver’s education classes have a rare opportunity to reach young drivers before they reach the road. Enlightening by exposing us to examples of what happened to others before us and giving us guidance that can one day save our lives.

My brother encouraged me to go through the same classes he went through at New London School of Driving. He told me I would be sick of hearing the importance of my seatbelt and semi scarred from all the stories of accidents among people my age, but I would leave with a real understanding and foresight into the real world of driving. He also mentioned something about laughing at a crazy British man full of witty sayings. I’m not quite sure what he is talking about but I look forward to finding out. I believe that taking driving classes at New London School of Driving is going to be a very informational and fun time that will prepare me for the adventure that is driving.