It is an almost universally accepted fact that teenagers consider themselves indestructible. When it comes time for them to get behind the wheel of an automobile, parents can hope that their child doesn’t approach the experience as if it were a new super-interactive, graphics-intensive video game. They can pray that this is not an excuse to try speed on for size, or take a foolish chance as a measure of coolness with which to impress one’s friends.

They can hope and pray, and do something about it.

For three years, Alan Deighton, President of the New London School of Driving, has been teaching teens the reality of the adventure upon which they are about to embark. “We say to them, ‘God gives you one fraction of a second to save your own life.'” says Deighton. What can one do in a fraction of a second? “Take your foot off the accelerator, click your seatbelt into place, or stop to look before proceeding into an intersection.

There are a lot of ways to save your own life if you use that one fraction of a second.”

Deighton and his wife, Linda, moved to this country from England 20 years ago. They have raised their own daughters here and each member of th family has become very active in the local community. As a result of having spoken with teens about their driver’s education experiences in public and private venues, they decided there was a need for better, more all-encompassing training. 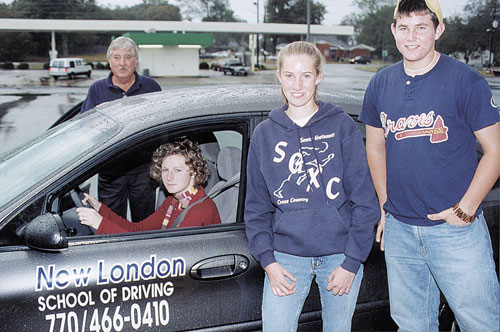 “Parents are literally putting their children’s lives in our hands,” says Deighton, “We take this very seriously. Driver’s training may be the most important lessons a kid ever gets. We really care about saving lives.”

New London does this by going beyond the requisite class time and road time.

Each student must accompany the class to traffic court where they get a first-hand look at what happens when the rules aren’t followed. “It’s a real eye-opener, watching drivers lose their licenses, get community service, jail time.” Deighton hopes his students leave the courtroom vowing never to return as a defendant.

The class also makes a pilgrimage to Metro Dodge where a mechanic goes over the basics of car maintenance; tire and oil changes, basic upkeep. The instructor throws in common sense lessons for free. “We say if you get a flat tire on a deserted road in the middle of the night, drive on the rim.

Better to spoil a rim, which can be replaced, than lose your life to an accident or predator.”

Parents of kids who have lost their lives to auto accidents have been invited to speak to the class. “It gets macabre sometimes, having to talk about death,” say Deighton, “but we want these kids to know that if they die in an accident they leave the devastation of their family members behind. Iwant them to say, ‘I’ll never do that to my Mom'”

Students are also addressed by police officers. “We let them ask the kinds of questions that are important to them. It’s important to build this kind of relationship with law enforcement,” explains Deighton, “Most of them want to know first if the cop has bullets in his gun, but they eventually get down to asking questions about what would happen if.” An insurance agent speaks to the class about the ramifications of being a teen driver. He explains that there is a one-in-three chance of a new driver wrecking his or her car in the first year. “Never loan your car to anyone,” is his message, “The kind of injuries that can result from an accident can bankrupt your parents.”

Talking to parents who have sent students through New London School of Driving you get the impression that a respectful relationship is built right away. “My son listens to nobody,” said one parent, “but one day I’m driving down the road and my son is critiquing the way I drive. He said, ‘Alan says we shouldn’t do it that way,’ and ‘Alan wouldn’t like it if he saw you doing that.’ And I thought ‘Alan Said?!!’ He’s really made an impression on my young driver.”

“These are developing adults,” Deighton says, “Each wants to be treated as who they are. We have a great time with the students. I could be having the worst day in the world, but talking to these kids is fabulous. It always cheers me up.” Parents find that they have open communication, before and after the program, with Deighton, who keeps them informed of their teen’s progress.

“They can call me any time and I’ll tell them how their kid is doing. Many times, I’ll run into a parent later who tells me that their driver is using the ‘Sane Lane’ and remembering that ‘Lights Lie.’ These kids learned theirlessons and have cut their chances of dying on the road.”

Word of mouth has kept New London School of Driving growing, particularly in the last year. If you would like more information about the school or are ready to sign up, call 770-466-0410 or go to www.newlondon schoolofdriving.com.